The Most Disruptive Disaster of All

A number of years ago, I recall being asked to review two university Hazard Mitigation plans that had just been approved by FEMA.  Both were extremely well written and included a detailed analysis of potential risks to campus, along with a somewhat ambitious implementation plan that I (in my role as a capital budget officer) knew would be challenging to fund in a timely way.  Even so, I was pleased that these two institutions had taken the time to work with their stakeholders to think ahead about potential risks to their operations.

The first document included the following extensive list of hazards:

Throughout the document, this list of hazards reappeared in tables, charts, and ultimately as titles of complete sections of the report, outlining in detail how the impact of each might be mitigated on campus.  Again, it was very well done

As I began reading the second HazMit plan on my desk, I immediately noticed a similar list of hazards, but with the addition of a handful of man-made events like terrorism and a nuclear accident.  Then something caught my eye.  The list included the following as a potential hazard:

I thought for a moment and recalled raging blizzards that dumped feet of snow that shut down campuses for days.  I remembered flooding that ravaged a few of our institutions and the resulting cost of rebuilding affected buildings.  We’d had fires, a deadly tornado, and hurricane damage that caused serious disruptions to university operations.  But an infectious disease or pandemic seemed a very improbable event.  Seeing it on the page conjured up images of sci-fi movies with deadly pathogens, vacant streets, and students and faculty peering from windows wearing face masks.  Of all the potential hazards on the list, this one seemed far too unlikely.  Even if a serious flu was rampant, those who got sick would stay home to recover and campus life for the healthy would continue uninterrupted.

Little did I know.

Little did any of us know just how impactful this single hazard on the list could become and how quickly it could overwhelm, not only a campus, but a community… a state… the nation and world at large.

As you’ve seen on this site, the impacts of COVID-19 have completely eclipsed much of the discussion on Hazard Mitigation Plans.  Not only does it turn out that a pandemic should be included as a critical, potential hazard, but the lingering effects of the Pandemic on society and the potential for spreading the pathogen limit the abilities of communities and campuses to mitigate its impact or even address the needs of victims of other disasters that may occur while the pandemic is raging.  For instance, the size and configuration of a shelter for displaced residents of New Orleans following Hurricane Ida (2021) looks much different than it did for Hurricane Katrina (2005).*

Hindsight is, as they say, “20/20.”  Even so, it cannot be too strongly stressed that, as it turns out, the most disruptive disaster of all has been the COVID pandemic of 2021.  Campus operations were shut down for months and then curtailed significantly for another year; and they are likely to continue to be impacted at some level for years to come.  The future is unknown.  Even so, plans are being made to reconfigure buildings and revise facilities planning guidelines for what might come.

Which brings me to something I read recently posted by the National Center for Disaster Preparedness, at Columbia University’s Earth Institute.  The Center looked at Hazard Mitigation Plans for all 50 states and 5 US territories.  They found that only a handful had addressed the impacts of a pandemic in the same detailed way they had addressed other hazards; and many hadn’t addressed the issue of a pandemic at all.  The data looked like this (source is the posted link above): 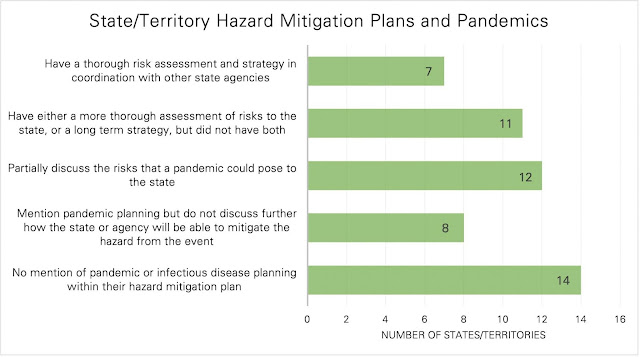 The authors of the analysis noted that “identifying and planning for the risks of potential disasters, such as a pandemic, is the first step to ensuring that communities and regions are prepared for them.” And yet that wasn’t happening.  The post continues:

Many states categorize pandemics as having a low probability of occurring when compared to other natural hazards, but the current pandemic has shown the long term devastating social and economic consequences. In particular, COVID-19 has had disproportionate effects on low-income communities of color and front-line workers. Thus, in addition to having a clear strategy and response plan, it is essential to identify the most vulnerable populations and hazard areas, and to have a strong framework for coordination among emergency management and public health agencies…

Planning must go beyond disaster response but also building community resilience by bolstering healthcare, Internet access, and other needs for direct assistance when it is needed most. Although hazard mitigation plans can help identify the networks and communication strategies needed, they are just one piece of the response framework. There is an important opportunity for state and local emergency management to strengthen responses and coordinate with public health plans for future events that could be like COVID-19, as well as to prioritize identifying and having a plan to protect people and sectors that would be most affected by a pandemic due to structural inequities. Going forward, FEMA and states can work to evaluate outcomes from COVID-19 to devise more effective hazard mitigation plans.

I’m suggesting the same for our institutions of higher education.

*Footnote: Ida was a stronger storm when it made landfall in roughly the same general area as Katrina.  One of the reasons scientists noted seemingly less damage and inundation with the 2021 storm was the completion of major repairs to the levee system protecting the city.  Hazard Mitigation paying off.