The street view on Google Earth (above) is one of a suburban road called Nystulia, in a modern neighborhood in the village of "Ask," outside Oslo, Norway.  The gentleness of the hill and the appearance of the stately homes and condos belie the dangers beneath.

During a five year period (2003-2007), at the request of the government and developers, the Norwegian Geological Institute released a series of reports on the soils in the area and made a series of recommendations for development.  According to the NGI, there was a danger of landslide. The NGI recommended mitigation measures, including the following:

At some point, permits were granted and development moved ahead.  According to the NGI, it’s unclear how many of these recommendations were followed or how extensively the developers considered them.  Regardless, now 15 years later, a significant landslide event just two days before the end of 2020 swallowed dozens of buildings and has killed at least seven (with another 3 missing).  A landslide blog (here, with the original article here and and update article here) posted this photo of the aftermath. The yellow arrow (added here) shows the location of the Google camera that had captured the image above.  Sadly, many of the structures depicted in that photo (along with those inside) fell victim to the tragedy. 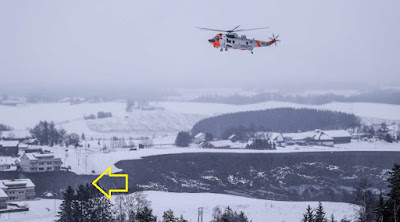 Clearly engineering solutions to this problem weren’t enough.  And, once again, as so often the case in events of this magnitude, the lesson learned is clear: The only way to truly be safe from some dangers is to stay as far away from them as possible.  That lesson resonates with one family interviewed by the New York Times:

“The village has suffered quite a tough blow,” said John-Magnus Restad, a pilot who lives with his wife and son about half a mile north of the site. He added that they were not sure they would stay in Ask. Though they knew the area lay on quick clay, he said he never believed “a slide of this proportion could happen.”

But the decision was clear for Trine Johnsgard, 60, who said she and her husband, Kjetil Johnsgard, who live about 80 yards away from the gorge, were lucky to escape their home with their dog Linus, a wallet and one cellphone.

“I hope we don’t have to move back, because we don’t dare to,” Ms. Johnsgard told the newspaper VG, adding that she worried about the value of her home, which is on a street called Nystulia, where many of the missing had lived. “No one wants to move to Nystulia now.”