Miracle? Or the Result of Preparation? (Maybe Some of Each!)

The following is cut & pasted from an email bulletin from FEMA [Building Science: January Updates from fema@service.govdelivery.com, Wednesday, January 26, 2022 11:10 PM, Subject: Federal Emergency Management Agency (FEMA) Daily Digest Bulletin]  No online link is available, but the information is too important not to share here.

On Dec. 10-11, a violent storm producing multiple tornadoes moved through four states--Arkansas, Missouri, Tennessee, and Kentucky. The outbreak included an EF4 tornado that was on the ground for 165.7 miles through northwest Tennessee and western Kentucky and another EF3 tornado running for 122.7 miles.

A pre-Mitigation Assessment Team (pre-MAT) was deployed on Dec. 19-23 to investigate building damage and look for safe rooms or storm shelters that may have been hit along these two paths, focusing on the EF4 track. 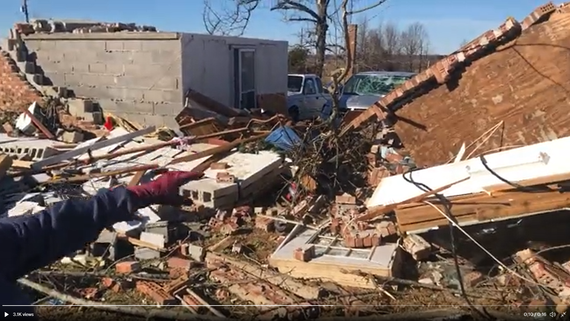 The pre-MAT discovered an interesting success story regarding a hardened structure pre-dating current storm shelter criteria in Bremen, Kentucky. Bremen is a rural town hit hard by the tornado, with 12 confirmed deaths out of a population of about 300.

Having survived a tornado in 1979, a military veteran in Bremen rebuilt his home with a hardened structure to protect him and his family if it were to happen again.

He hired a local contractor and got an engineer to design the hardened structure, hoping he would not need it while having peace of mind that it was there. Forty years later, he and 15 others including members of his family and neighbors took shelter in his hardened structure and survived while their homes were destroyed.

The pre-MAT team found most of the structure to be well designed and built, likely meeting many of the current requirements for a storm shelter.